How do Agent-Based Models work?

Agent-based modeling (ABM) is a technique for modeling complex systems to gain a deeper understanding of system behaviors; they simulate how all kinds of people, regulators, corporations, banks, or investors interact with one other and how that interaction could cause specific things to happen to them and to financial markets more broadly. ABMs are increasingly showing themselves to be the way forward for financial services, but internal inertia and lack of knowledge seems to be a barrier to deployment.

But how do ABMs really work?

Agent-based modeling and simulation extends the foundational principles of both Fermi’s work on neutron transport and Conway’s Game of Life, which you can read about in this article. In agent-based models, the agents are software entities, typically represented computationally as objects. This means that agents themselves hold a state. In Conway’s Game of Life, cells have a very simple state—they are either alive or dead.

In an agent-based model, the state can be any data that describes the agent; for instance, an agent that is used to represent a person could contain information about their age, height and salary.

In Conway’s Game of Life, information from other agents is restricted to just the neighboring eight cells. In an agent-based model, agents can pass information in arbitrarily complex webs of communication. Agents representing people might interact via their social networks which can describe the flow of information between millions of interacting entities. These networks are complex and are formally referred to as graphs. Modeling these graphs is referred to as graph computation.

Components of an ABM

ABMs contain autonomous models called agents. These agents can be an individual, a group of individuals, or even an organization. Each agent is defined with properties of its own along with relationships with other agents.

The topology of an ABM is the mechanism through which agents can interact with one another in the model. It can be viewed as having two aspects: the rules and the link structure. The topology rules determine the communication forms that the agents can have with one another, whilst the topology structure reflects the links that connect agents together to form a network.

Environmental factors can generally be thought of as shocks that occur to the model. These shocks can come in various forms that affect agent behavior and topology rules. Though the various sets of possible environmental factors can be astronomically large, the number to be tested is normally finite and often predefined by the set of objectives used in the model’s initial construction, such as stress tests or policies being evaluated by regulators or risk management groups.

Agent-based models let you model each individual item of interest; you can model ants, a customer, a household, a small business, a large corporate, a government and so on. You can also inject realistic or irrational behavior into your models. Capturing the heterogeneity of the real world with a ‘bottom-up’ approach (illustrated in Figure 1) makes the models incredibly interesting. 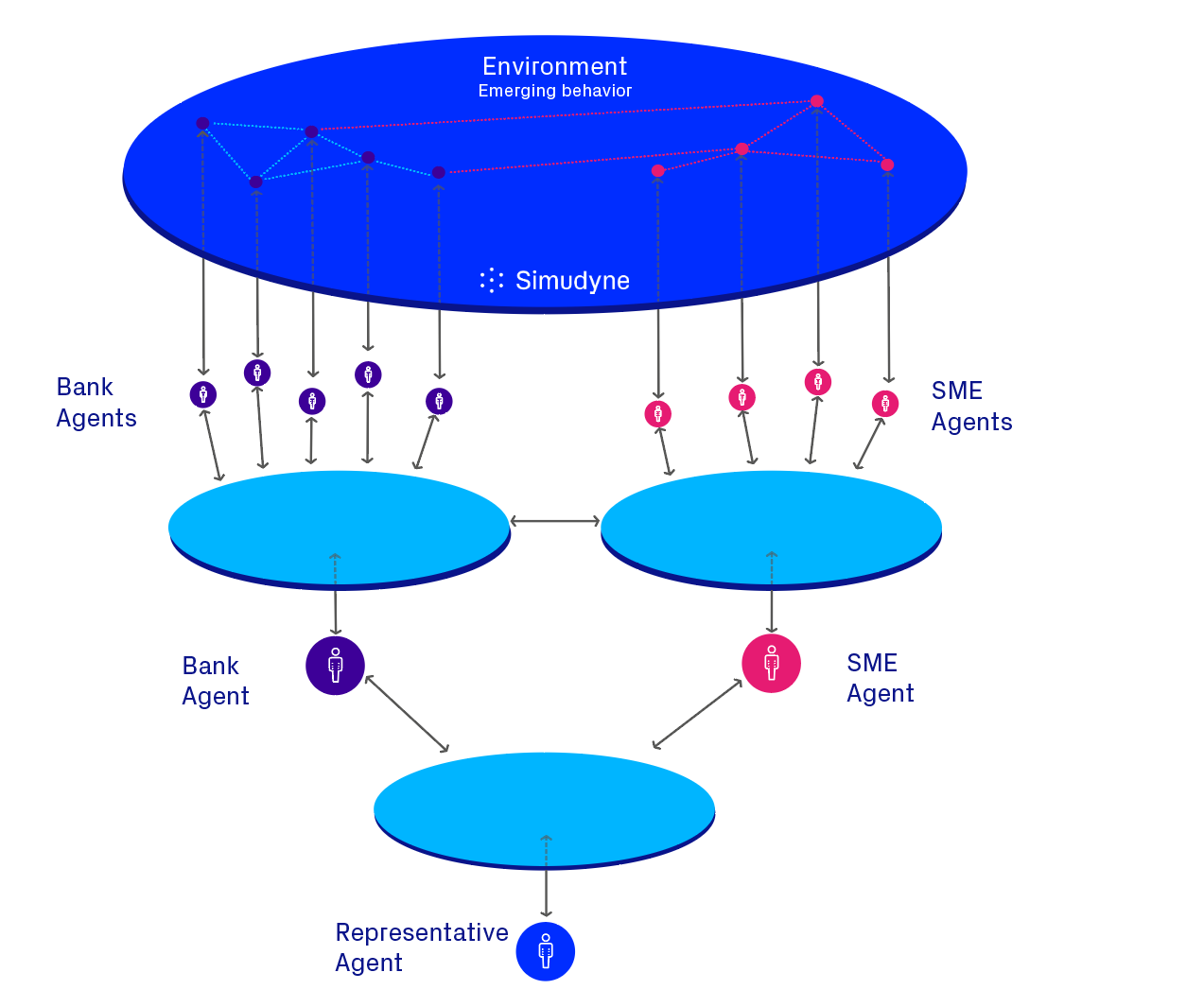 When you then simulate the models, you can see emergent phenomena. This second feature of ABM is profound; birds flocking, locusts swarming and ants building bridges are examples from the natural world. This contrasts with some other modeling approaches in which the actions of many individuals are assumed to lead to a particular outcome, often using a single representative agent.

Agent-based models allow us to recognize that financial markets are interconnected and exhibit non-linear behavior. This means that you’re explicitly modeling the bank and the market in which it operates as a complex adaptive system. Rather than ignoring complexity, you’re actively embracing it.

Banks are starting to realize that ABMs give a more robust view of the financial system and could enhance existing modeling techniques used across their organization.

Why are agent-based models so useful?